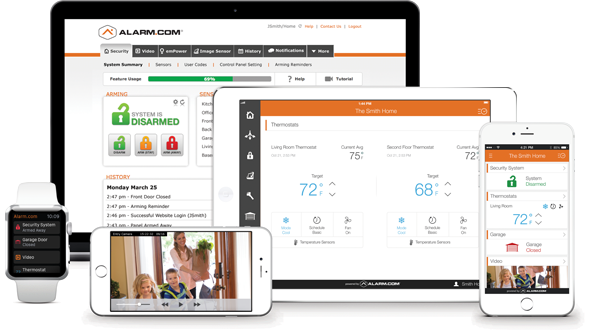 How to prevent fires with Smoke Detectors

Whether it is your home or your business, losing all of your valuables and possibly endangering employees or family members to a fire, is devastating. But it can be prevented. Simply, smoke detectors can help stop a fire in its tracks and prevent more damage. It is a small price to pay to save massively in the long run.

But it’s not always as simple as just going down to a store and buying and installing a smoke detector yourself. Having the right system in place installed properly is more than half the battle. Having said that, it’s good to know the basics. Let’s get into that!

What are Smoke Detectors?

Smoke detectors are required by law to be installed in houses and buildings as they detect smoke which is an indication of fire. As soon as the smoke is detected they set off alarms in residential areas alerting household members that there is a fire. In buildings such as business places or even condo or apartment buildings, the smoke detectors may be set up to the sprinkler system. After a certain period, the sprinklers may go off if the smoke detector is not shut off. They may also alert authorities automatically.

Having a smoke detector in one’s house or business is essential. Without them, humans may recognize that a fire has started. For instance, someone could be on the third floor with a fourth-floor fire. By the time they find out it may be too close to them but with a smoke detector, they can immediately be alerted. The same can be said if a family was asleep. Immediate detection of smoke can allow for a family to have enough time to get out of the house before someone gets hurt. In fact, smoke detectors save nearly 50 percent of people from death by fire.

The overall picture outline above is just one of the many benefits smoke detectors offer. The primary goal is to keep human life safe but there are other benefits as well.

Protecting yourself is the most important thing but having a smoke detector pick up the fire early can help save any valuables to your home or business. The sooner the authorities are alerted the faster the fire can be put out. This hopefully will minimize the damage and the costs to repair the building and belongings.

Most fire departments are alerted within minutes of the smoke detector going off. Of course, accidental triggers like smoke from cooking happen which is why there is usually a small amount of time to allow the detector to shut off. Any people inside the building don’t have to worry about calling the police and can just focus on getting out safely thanks to the fact that monitored smoke detectors give the location to fire departments immediately.

Smoke detectors are required in residential and business properties. Having said that the more high-tech and high-quality your smoke detector is, the better chances you have at insurance lowering your premiums. Insurance companies may also cover the costs of smoke detectors installed as a part of a large security system.

There are just two types of smoke detectors that you can choose from. This may surprise you as many homeowners and sometimes even business owners don’t know that there are two options and what their differences are.

The following types of smoke detectors systems are:

As stated in its name, this type of smoke detector uses ionized particles to detect the presence of smoke. These detectors have small amounts of radioactive material inside them that is placed between two electromagnetically charged plates. Ionization in the air occurs because of the reaction from the current between the two plates. How the smoke detector works is that when the smoke enters the alarm this current is interrupted and in turn triggers the alarm.

In general ionization smoke detectors are said to respond well to fires that have open flame because of the way the smoke gives off.

These detectors are said to be better for early detection because of the way that smoke travels before the fire.

How do Smoke Detectors work?

Smoke detectors work in one of the two fashions mentioned above. Both types of smoke detectors can be self-monitored or company-monitored. When the smoke detectors are self-monitored may just be connected to your phone  Smart technology now allows us to pair our smoke detectors to our larger security systems that can be controlled from control panels or phones. You may feel like you should choose between the two listed above but what most people don’t know is that it can be beneficial to have both installed as one necessarily isn’t better than the other.

Within the two types of smoke detectors, there are different ways you can operate them. They can either be battery-operated or hard-wired. Battery-operated smoke detectors are the most popular function types out there because of their low maintenance and ease of use. Most battery-operated fire detectors will start to beep to let you know that the battery levels are getting low and it’s time to replace them. This is important so that you don’t end up with a fire alarm that doesn’t work.

Knowing exactly what smoke detector to choose can be hard with a surplus of options out there with a multitude of affordable rates. While most aren’t expensive, quality is important and should be one of the top priorities when making a purchase. So here are some of the best smoke detectors out there right now.

This smoke detector is another multifunction piece with a lot to offer. It functions as a photoelectric monitor that uses light to detect smoke. But it also performs the job as a carbon monoxide detector as it has electrochemical sensors as well. While it performs its many jobs well it also has some great benefits.

This detector has a fun side as Alexa is incorporated into it and it can act as a smart device as well. You can find out the weather, talk to it, or play music. Like the previously mentioned option, the Nest and Onelink are two of the more expensive fire alarms in the game.

Unlike the other two pricey options, you may recognize this fan-favorite and affordable smoke detector. This is a common household item as Kidde has been around the smoke detector game for quite some time. Despite not having some of the other smart features the other two have, it still can detect all three main threats. Fire, smoke, and carbon monoxide.

Fire alarms can often get triggered by humidity but this Kiddie divide can withstand up to 95 percent without triggering a false alarm. It also has lights for those who have a harder time hearing or impairments to let you know something is wrong.

Smoke detectors are one of the more simple pieces of equipment when it comes to complete security systems. This is because they are standard for every building regardless of whether it is residential or commercial. Some common questions still come up time-to-time. Here is the rest of what you need to know when it comes to your smoke detector.

Where Are Smoke Alarms Placed?

A team of well-informed staff from Circle Security Systems can recommend where the best places in your building are to put the smoke detector. Having said that they should be placed in several different rooms of a home or business so they have easy access to anywhere a fire could be. They should be placed far enough away from high-humidity areas like showers where the steam may trigger the alarm.

I’ve Replaced My Batteries And I Still Hear A Chirp, Why?

What Happens With Power Outages?

This is why even if you have a smoke detector that simply relies on electricity,it will always have batteries. This is for emergencies like power outages so the smoke detector can run and function properly without needing the electricity. This is also why the batteries still need to be looked out for and changed at the appropriate time because it can be easier to forget about them if it is not a battery-operated smoke detector in the first place.

It’s good to double-check your smoke detector system when a power outage occurs to ensure that it is still working properly.

There is nothing more important than making sure that your fire and smoke detectors are working properly. That’s why having it installed by a professional group such as Circle Security Solutions is crucial. They have a great partnership with Alarm.com that uses the finest alarm systems and smoke detectors. This can put any homeowner or business owner’s mind at ease because they assist in the full process from choosing the right type of smoke detector for your needs to installing it. They can even help monitor should you decide you should implement a monitored security system.

Smoke detectors have proven statistics that they can save lives 50 percent of the time from a house or business fire. This is an incredibly powerful statistic that should urge everyone to take the proper measurements in protecting themselves, their family, and or employees. While it is required by law to have certain measurements set up, you can always go above and beyond what is required and make sure there are accessible smoke detectors in all the places of your house or business.

This can help aid authorities to get over as quickly as possible to not only minimize your damage but also the possibility of damaging other nearby properties as well. There are many different options to choose from when it comes to selecting your specific smoke detector and whether it costs a lot or a little, you will want to make sure it is high-quality and performs its task.